What are the different mobile battery fast charging technologies and architectures that can support 50W and more?

USB Power Delivery 3.0 raises power delivery capabilities to 100W with maximum power being delivered at 20V and 5Amps.  OPPO, Realme, OnePlus, Xiaomi and other manufactures have introduced fast charging technologies with 50W and beyond.

Some of the fast charging architectures are shown in the figure below.

Standard buck converters or charge pump based converters can be paralleled up to achieve rapid charging. Some of the leading IC manufactures like Qualcomm, Texas Instruments etc. have 5Amp standard buck USB chargers and even higher current charge pump chargers, which can be connected in parallel for higher powers.

Charge Pumps can be also be stacked-up in series to charge from a higher input voltage as shown in the figure below. In addition, direct flash chargers simply vary the adapter voltage to track battery voltage and charge them directly without any voltage regulating charger in the phone. 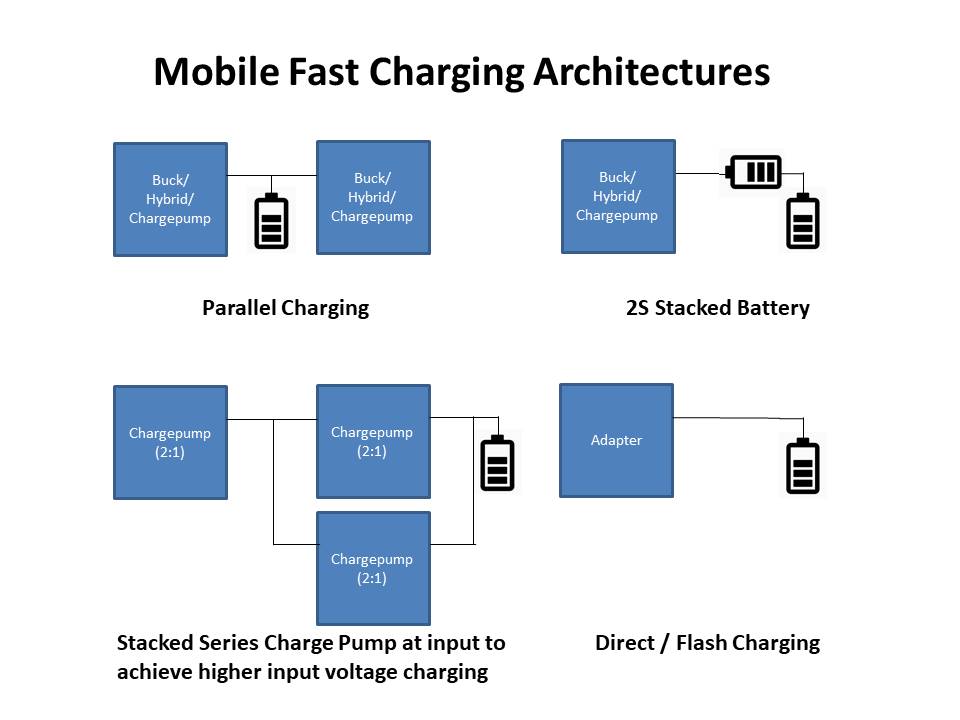 What are the charging capabilities of the different architectures?

For a single buck converter charging power is limited by the Inductor DCR (20 milli-ohm DCR is used for calculation, which is a typical DCR number for the low profile 1uH Inductor commonly used in the application). Charging capability is doubled by connecting two of them in parallel.

Direct Flash Chargers (not shown in the table) have the fastest charging capability, however they need to track the battery voltage and need high cost, high current cables as the adapter current is same as battery charge current. In addition, they cannot charge from higher adapter voltages. Instead, for higher charging power, batteries are stacked in series to charge from a higher adapter voltage.

SiBreeze's hybrid battery charging technology significantly reduces inductor DCR as inductor and DCR values are scaled by a factor of 4X (for 3-level hybrid). A 5milli-ohm, 220nH inductor is used for calculation in the above table (which are 4x smaller than that used for a standard buck converter).

From the table it can be seen that Sibreeze Technologies hybrid charger achieves one of the fastest charging rates as input voltage (adapter voltage) can be raised higher than a charge pump converter thus delivering power charging power.

Furthermore, it can use a standard USB-C 3Amp cable to achieve up to 60W of charging by changing the adapter input voltage higher to 20V, which is not possible with a charge pump as it needs to track battery voltage by 2x all the time.

To alleviate high voltage limitations, a two stage series charge pump can be used to charge from higher adapter voltage. However, as shown in the above table, because of the efficiency degradation of the two stage topology, the series combination of 2:1 charge pumps (even with two parallel pumps at the battery) cannot achieve the charging capabilities of a hybrid converter.

For all topologies efficiency and charging rate can be improved further by reducing the  resistance of the power switches in the die. However for standard buck converter the efficiency improvement is minimal due to inductor DCR and also the charging rate is limited by the inductor saturation current. Hybrid buck converter doesn't have these limitations because the inductor DCR is 4x smaller and current capability is 4x more (for a 3-level hybrid).

For all the topologies, the charging power is doubled by using a 2S series stacked battery.

What about the cost differences?

In summary how do the different mobile battery charging architectures compare?

Even though in theory charge pump based chargers are the fastest, their capability is limited by lower adapter voltage, which needs to track battery voltage. Furthermore they need more expensive cables for same charging speeds.

SiBreeze's hybrid architecture approaches the theoretical charging speeds of a charge pump based charger even with a standard less expensive 3AMP cable and power is not adapter voltage limited and the adapter voltage can be raised higher for faster charging.

Series charge pumps are less adapter voltage dependent, they are how ever suffered by the efficiency degradation of the two stage conversion. 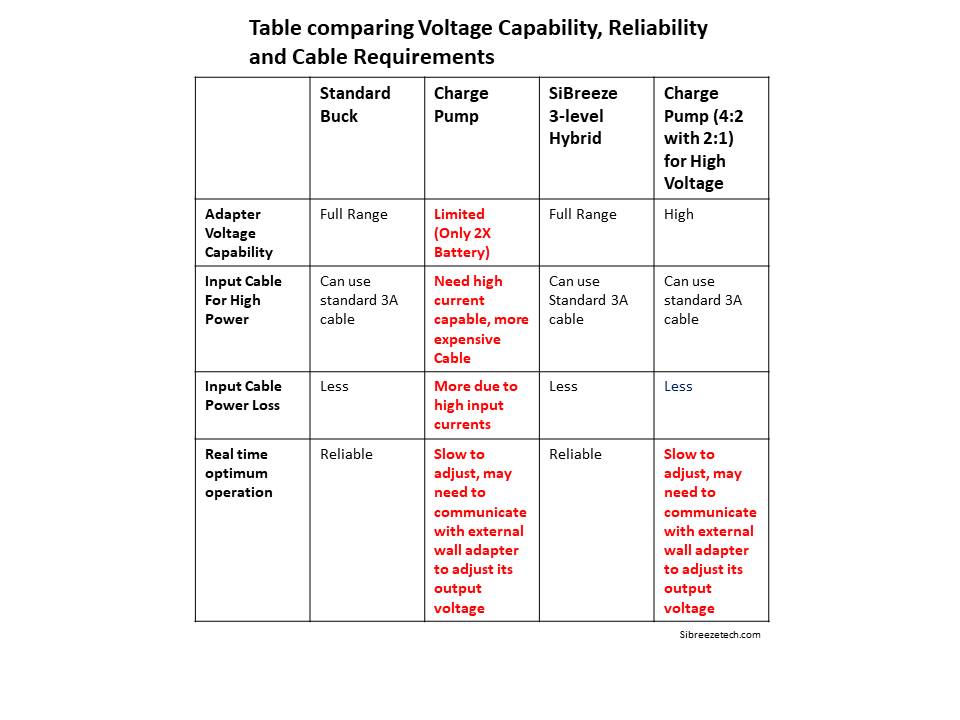 4 comments on “Comparison of Mobile Fast Charging Technologies and Architectures”